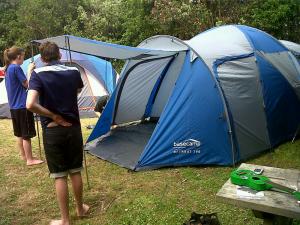 Putting up the tent

OK, so those of you who know me will laugh hysterically at the title of this post, because despite having done a lot of camping as a youngster, I haven’t done it for a long time, and I do like my creature comforts.  But I was talked into it by my (much more adventurous) mother-in-law, and there turned out to be a lot of positives.

This was for all of us. There was limited cell-phone reception, no places to recharge our devices and absolutely no internet access. My twelve year-old managed to eke his iPad battery out over the 5 days of the trip, but he was reading (he prefers an electronic reading medium to old-fashioned paper). The other teenagers had their iPods, and they were listening to music. Otherwise, we were mostly out of touch. I had forgotten how relaxing that could be!

2. Time for each other 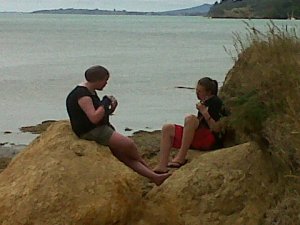 The girls playing the ukes out on the point

No TV, no computers, no shops. What were we to do? Well, we played hours of cricket. We went swimming and kayaking. We played board games. We sat quietly together. We sang Christmas carols and pop songs with a ukelele accompaniment. Several of our kids headed out to the point and played their ukeleles and sang together for hours on end. Awesome.

We had nearly four excellent days of weather. Then the wind and rain set in. We packed up the less sturdy tent and piled the teenagers in with us. The small boys went into the campervan with Nana. As we played charades with the teenagers by torchlight with the tent billowing in the wind and rain pattering down outside, there was much love and laughter. As we all got soaked the next day pulling down the big tent, it became an adventure to talk about with others rather than something to be complained about.

Sunset on the last night after all the rain.

Our teenage daughters (aged sixteen and fourteen) were out in the kayaks with their twelve year old brother, one of the six year-olds and a random eight year-old from the campsite. They noticed that they were being blown swiftly and dangerously out into the bay. They came up with a plan to get everyone back to shore safely and implemented it. Yes, there was an adult in the water with them, but she had already kayaked into the beach with one of the younger boys when the girls realised they were getting into trouble. There was another adult on the beach if needed, and the bay was reasonably safe. Nonetheless, they were able to assess a danger and react to it in a way which kept everyone safe. It also involved some tricky manoeuvers with transferring a six year-old from one kayak to another, strength in kayaking back against the wind and tide and quick decision making. I was very proud of them, and the eight year old’s parent, who was watching from the beach, made a point of commenting on the leadership that they’d shown.

We adults also learned things to do and not to do, and what to bring if we do this again!

How could I have forgotten about campground camaraderie? My younger boys buddied up with a couple of slightly older boys; the campground cricket that we started involved a number of families; casual conversation elicited the fact that a five year-old fellow camper had just been diagnosed as a Type 1 diabetic and she was able to talk to our fourteen year-old about his experiences. When one group of families had a fire with their gas cylinder, we all gathered round to see what we could do (after we’d watched them sprinting to the sea with it on fire – very dramatic). We loaned someone else our mallet to bash their tent pegs in. It was a wonderful community and something which had completely slipped my mind from my earlier camping experiences. 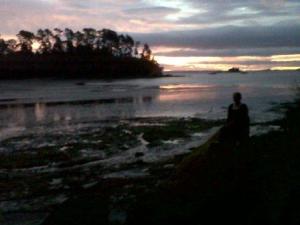 Did everyone love it? No – especially one of our teenagers who desperately missed the technology, shops, buildings and the concrete. To offset him were the ones who loved the outdoors – the trees, flowers, water and environment. Would it have been nice to have a warm shower? Definitely! Was cooking for ten  (and cleaning up!)a bit of a pain? Yes, but not as much as I thought it would be. Was the weather a nuisance? Yes. But in the main, the positives we took from camping as a family far outweighed the negatives. There’s even talk of buying our own tent, and most of the children are talking about “when we go camping next Christmas”. All-in-all a good way to start our holiday season!