Shame on you, Boy Scouts Association of America

I recently came across this article talking about the Boy Scouts Association of America, and the decision currently up for discussion by their board – should they let gay children be part of the BSA and should they let gay parents be troop leaders? Actually, the proposal up for debate is should the local troops be allowed to decide for themselves whether to allow gay membership – something which is not currently allowed. Their existing policy is to exclude all known gay children and adults. The BSA couldn’t make a decision, due to the complexity (and the strong arm tactics by various groups) and have put a decision off until May.

I am appalled by this on so many levels. First of all, this organisation, supported by many Christian groups and with a strong moral stance, is excluding children who want to participate and parents who are willing to help give their children and others a wonderful series of experiences and life lessons.

Secondly, that the church groups, these so-called Christians, are saying that if the BSA allow gay troop members and leaders, they will withdraw all financial support. So much for doing unto others as you would have them do unto you. What are these people so worried about? Do they think that gay children will corrupt their own or that gayness is catching? Do they think that gay adults are all paedophiles, or is it just their lifestyle choices that they think are questionable?

But the thing that appalls me most, personally, is the picture at the top of this article.

Look at the age of these boys. Already, they have been taught to hate those who are different. They’ve been told, it seems, that being different is wrong. What a terrible message.

How would I feel if one of my children told me they were gay? Well, in some ways I’d be a little sad, because life can be just that bit harder for a gay person, even in our supposedly enlightened times. But for the most part, I want my children to be happy; to love and be loved and whether they are gay, straight or otherwise makes no difference to that hope. They will still be my child, no matter what.

Love is love is love, and in my eyes, the more love in the world, the better place it will be. The BSA is being cowardly, exclusionist and outdated, and they are teaching their 2.7 million youth members that this belief system is valid. Shame on you, BSA, shame on you.

Here’s a great post from Ask Your Dad on this topic. And in a related post, here’s his letter to his hypothetically gay son. John Kinnear lives in Utah, and has a great feeling for how things are in that neck of the woods.

What do you think of this situation?

Just as a side note, I’ve checked out the New Zealand Scouts association website and can’t see any rules against gay children. But then, they let girls in too 🙂

TV shuts down your child’s imagination – or does it?

Before I had kids, I was divided on the positives of television for children. It seemed to me that it was like anything else – in moderation, it was fine and seemed like it might be quite a useful device from time to time. But then once I got pregnant, I read a lot about the evil effects of television and how it shortened our childrens’ attention spans and totally shut down their imaginations. I knew families who didn’t own a television, and their children were certainly imaginative, well-spoken and outgoing and could amuse themselves for long periods of time. So we decided on halfway ground. When small, our children didn’t watch a lot of “live” television (complete with ads), we recorded programs which we liked and thought might interest them, and removed the advertising, and they watched DVDs.

I was worried about their imaginations being stifled, but what I found was that the children took the shows and made the characters their own. We have four older children, and it’s amazing how many children’s books and shows also feature four children. Let’s think about it for a moment: The Lion, the Witch and the Wardrobe – Peter, Susan, Lucy and Edmund (two boys and two girls conveniently);  Teletubbies – four of them; Tweenies – Bella, Milo, Fizz and Jake (again, two boys and two girls and freakishly like our four); Kim Possible – Kim, Ron, Rufus and Wade; Teenage Mutant Ninja Turtles – all boys, but Leonardo is the leader, Rafael the hothead, Donatello the inventor and Michelangelo – the goofy one who is obsessed with food and my two girls and two boys were able to identify with one of these each and so the list goes on. They would take on the characters, and invent scenarios in the worlds of the characters. Lots of roleplaying, lots of (somewhat derivative) stories and scenarios, and lots of inventive imaginative play.  I’m not going to tell you which child related to which character, on the grounds that the therapy bills may be too high.

My younger children (two boys who are now six) take this one step further. We’ve applied similar TV watching rules, and in fact, the boys watch very little ‘live’ TV. They are, however, exposed to totally age-inappropriate viewing courtesy of their older siblings. One of them threw a complete wobbly the other day because his sister noticed he had crept into the room and was engrossed in “Buffy the Vampire Slayer” so switched it off. He wanted to see the vamp get staked!!! They do watch a wide variety of shows, and have some special favourites – X-Men, Justice League, Avatar (the Last Airbender, not the blue aliens), Ninjago, Kim Possible, Teenage Mutant Ninja Turtles and so on. There are only two of them, but they either take multiple roles, or they rope in school friends or their older siblings to be the other characters.

Here’s a conversation I overhead the other day.

Conal “Sam, watch out! Sensei Wu told you not to attack the Storm troopers!” (Lord of the Rings, Ninjago and Star Wars)

Zac “It’s OK, here come Batman and Zane and they’ll help him get Frodo out – they’ve got Harry’s wand!” (Justice League, Ninjago, Harry Potter and Lord of the Rings)

I’m not sure whether to be concerned about this total mashup of stories, or entertained. Mostly, I veer towards wildly entertained! Here’s a great picture demonstrating one of their stories. For those not up with the pop culture of six year old boys, the fighter is a Star Wars Lego kit. The figure is a Lego Ninjago character called Jay. You can’t quite see R2D2 in the cockpit of the fighter. Frodo fell off the front a few minutes before and Jay was catching him with the rope! 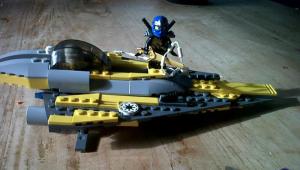 Star Ninjago of the Rings

So where am I at with the TV watching and imagination? I still think that in moderation, and with some discretion, TV is not all bad. Obviously, we do to some extent direct what the children watch. That’s not to say that there are not times when we find a child vegged out in front of some mindless drivel, but then again, we’re guilty of that from time to time.

I have been pleasantly surprised by the imaginative games that seem to be inspired by the stories on the TV or in movies. Toy manufacturers like Lego do capitalise on this by producing figures, kits and books. But honestly? When you hear your kid discussing what makes a bad guy and what they should do if they see someone being mean to another person or animal, is that all bad? When you hear them taking on a character and changing their way of speaking and making up a complex story involving multiple mythologies, is that all bad?

Where do you weigh in on the TV versus imagination debate?