The perils of school for twins – transitioning and managing! 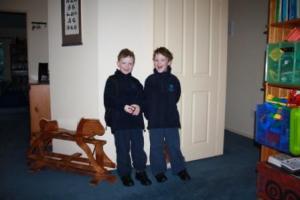 Zac and Conal on their first day of school

Before my boys started school in August last year, I did LOTS of reading about it. What should we do, should they be together or separate, how to best prepare them. And I came down to a few simple things from this, but also from starting the older children at school!

And what about you as a parent? Here are my tips:

My boys are now in their third term of school. They’re still in separate classes. One is reading and writing at a higher level than the other, one is writing more neatly. One is doing very well in terms of not being distracted (in a class of 16, 5 year old boys, this is an impressive feat). One is doing well with managing himself and staying on task better. One has endeared himself to the occasionally grumpy deputy principal by making her a thank you card. The main thing for me? That the school has treated them like the individuals they are. They have taken their needs into consideration and taken time to fit them to teachers who will suit them.  Interestingly, one of my boys has a set of twins in his class and they have kept them together. So they have no one size fits all policy, which I think really as a parent of twins, that is all you can ask. To me the clincher is that they love going to school each day, they are positive about their experiences there and are happy. I can’t ask for more.